Not All Salt Is Created Equal

Salt can't be produced just anywhere; certain geological and meteorological conditions must be met. That is why 92% of U.S. salt is produced in just 7 states.

• Click here to learn more from the USGS about US salt production. 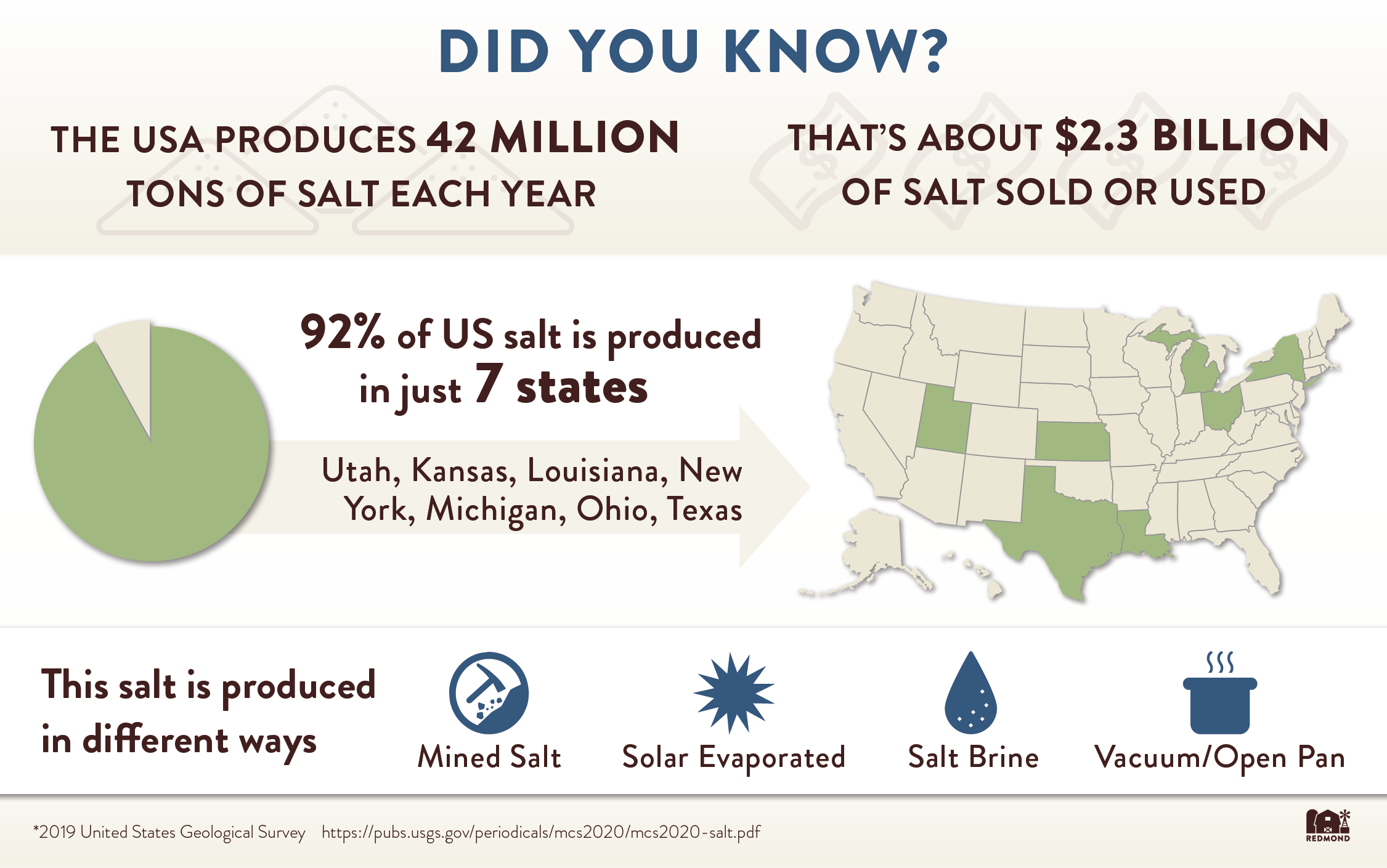 The location determines how the salt can be produced or harvested.

Some areas are fortunate enough to contain natural subterranean salt deposits where it can be mined. These deposits are the remains of ancient sea beds, where excess minerals fell out of solution and built up on the seafloor. Mined salt usually contains other minerals within the salt which broadens its mineral profile, improves its taste, and enhances its color.

In coastal areas with little rainfall, solar evaporation can be used. Saltwater fields are left to evaporate until salt crystals remain behind for harvesting. Inland locations sometimes pump water into subterranean salt deposits, and bring the liquid salt brine to the surface where it can be evaporated. Solar evaporation produces traditional white salt (sodium chloride). This transition from solid to liquid back to solid does alter the salt’s chemical and physical properties from its natural form.

Some locations have either not enough access to sunshine or too much precipitation for solar evaporation. These operations pump liquid brine into large pans, boil off the water, and harvest the white salt crystals left behind. Similar to solar evaporation, this process of dissolving and evaporating changes the salt’s physical and chemical makeup from its natural state.

The Redmond Mineral and Clay Deposit

There are few locations on Earth that contain the richness found at the Redmond mineral deposit in central Utah. Nature has endowed this deposit with special chemical and physical properties, which can be discovered in its unique geological history. 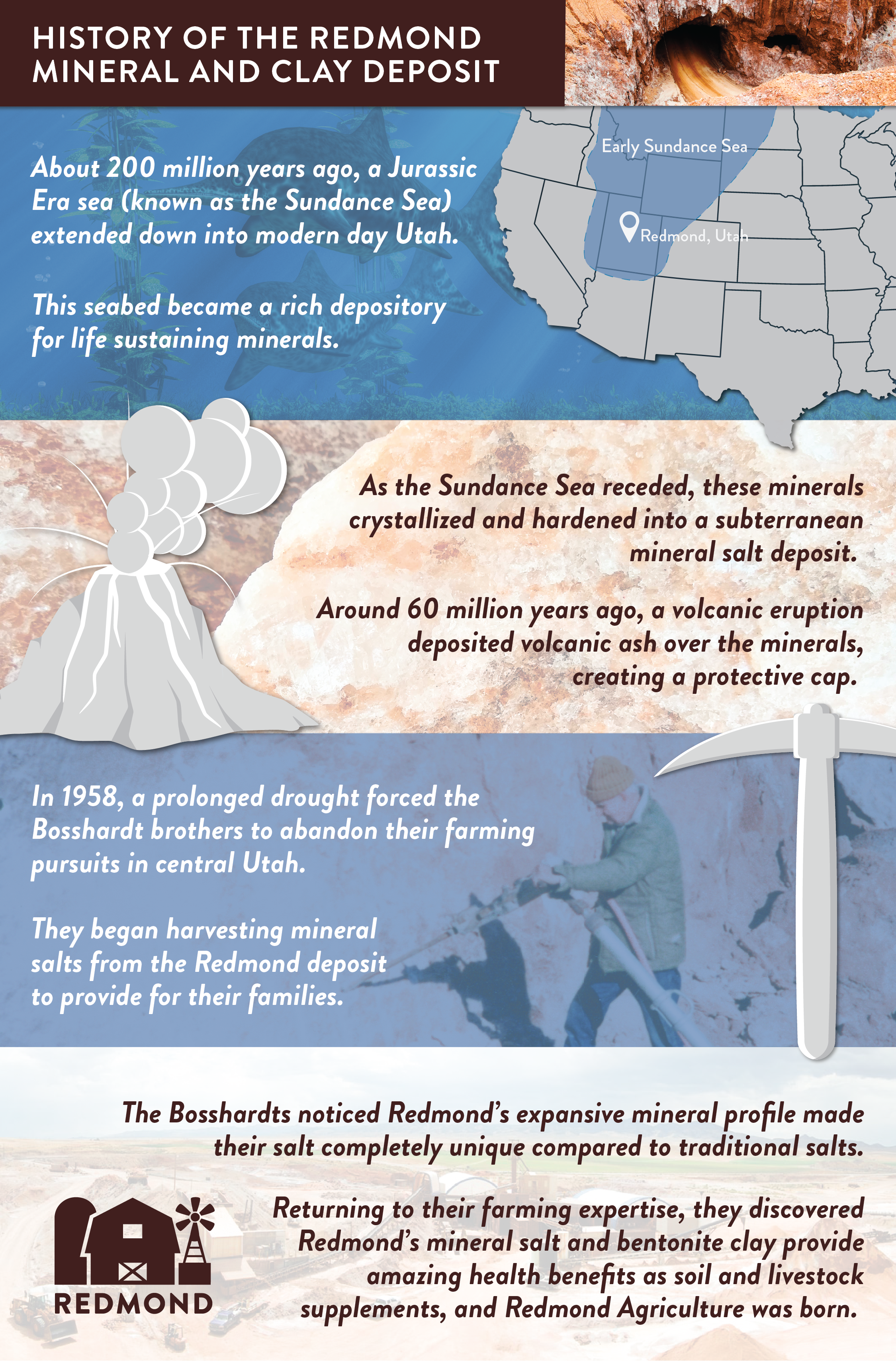 Around 200 million years ago, an early Jurassic sea (known as the Sundance Sea) extended from the western coast of modern day Canada down into what is now the continental United States. Over time, this ancient seabed became a rich deposit for a wide profile of trace minerals. As the Sundance Sea retreated, the minerals hardened and crystallized.

Then around 60 million years ago, a volcanic eruption deposited ash over this mineral deposit. The layer of ash created a natural, protective cap which further preserved the minerals below. The volcanic ash weathered to become a nourishing layer of bentonite clay. Because clay particles naturally attract and retain ions and nutrients from their surroundings, the Redmond clay deposit became imbued with the rich, deep sea minerals in its environment.

A prolonged drought forced the Bosshardt brothers, Milo and Lamar, to abandon their farming pursuits. The brothers knew Native Americans had once harvested salt from the area, and began harvesting salt from their land to provide for their families.

The Bosshardts quickly realized Redmond salt was different from other salts. They first noticed that it was far more effective at melting ice and snow than traditional white salt, and began selling it as a premium highway deicer (Ice Slicer).

The brothers then returned to their farming experience, and discovered Redmond mineral salts and bentonite clay offered a wide variety of health benefits for soil, vegetation, and animals alike. Redmond Agriculture carries on their farming legacy with soil and livestock supplements that are unparalleled in their taste, cost savings, and production benefits.

Today the Redmond mineral and clay deposit is a thriving operation for the ever expanding Redmond family of products. Over the decades, more and more industries have come to enjoy our unique profile of over 60 trace minerals.

Redmond is proud of our special geological history, and takes our environmental stewardship over this deposit seriously. We love to offer all natural products to nourish the world from the ground up.

Have you, your crops, or your animals tried Redmond Minerals yet? Give us a call at

to find unique products that can help your farming operation increase production, save money, and continue to thrive.