What Does 60+ Minerals Mean?

Because minerals continuously leach from the Earth’s surface (due to wind, precipitation, and erosion) seas are a treasure trove of life sustaining minerals. Redmond’s minerals are harvested from the crystallized remains of a Jurassic Era sea that has been protected by a volcanic bentonite clay cap. This mineral and clay deposit, in central Utah, is geologically unique and serves as the foundation for all our soil and livestock products.

As an ancient sea deposit, Redmond’s minerals clearly contain a few different salts. However, one glance at our natural color variations shows there is so much more. 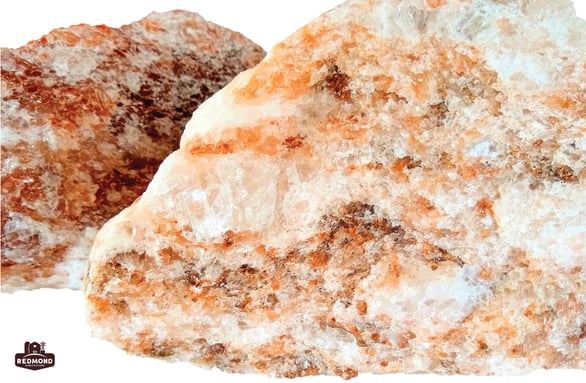 To learn more about which minerals are present in our deposit, Redmond submitted samples to ISO rated Advanced Labs in Salt Lake City.

How Does Mineral Testing Work?

Mineral testing labs use a variety of methods to find which elements are present in each sample submitted. Not only do they discover the chemical composition of these samples, but also their concentrations (how much of a certain element is present).

Advanced Labs uses specialized instruments that excite the atoms of the sample with plasma. Once heated by the plasma, the sample’s elements give off waves of electromagnetic radiation. Each element has its own signature wavelength. The scientists use an instrument called an ICP-OES to identify each element by their wavelength and an ICP-MS instrument to measure each atom’s mass and find out how much is present in the sample.

Advanced Lab’s measured the different minerals in Redmond’s sample down to parts per million. They found that Redmond’s mineral profile contains over 60 different minerals in varying quantities. These results can be found in our mineral analysis (see below). The majority of these minerals are present in trace amounts and are referred to as “trace minerals.” These trace minerals are contained within a carrier of delicious salts that animals love.

A reliable mineral analysis will differentiate between a guaranteed analysis and a typical analysis. This allows a mineral report to accommodate for the concentration variations that naturally occur in mineral deposits. 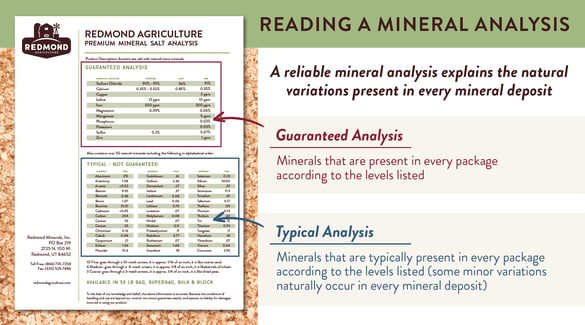 Parts Per Billion vs. Parts Per Million

Redmond requested a mineral concentration test down to parts per million (ppm) because these units are readily used by the agriculture industry. If a parts per billion (ppb) test was conducted, even more minerals would be discovered in Redmond’s sample.

Some companies test their products down to ppb which allows them to inflate the advertised number of minerals in their products. However, these minerals are not present in significant enough quantities that would matter for soil and livestock uses. It would take 1,000 parts per billion to equal 1 part per million.

According to the EPA:

Why Do These Trace Minerals Matter?

Even though they are only needed in trace amounts, trace minerals provide a wide range of health benefits for all living things. The mineral profile naturally found in deep sea water, has been a point of interest for medical researchers for a long time, especially for Dr. Maynard Murray MD.

He devoted the bulk of his career to studying why ocean life was devoid of the degenerative diseases that plague land animals, including humans. Dr. Murray discovered that the mineral profile of deep sea water was mirrored in the elements and concentrations found in healthy blood, specifically plasma. His book, Sea Energy Agriculture, explores how using deep sea minerals can eliminate trace mineral deficiencies. He said:

“The discovery of these facts led to researching the effects of sea minerals applied to soils and plants for healthier food. The results were astounding—plants grew faster and healthier, were more disease resistant and maintained higher nutritive value. Animals also preferred to graze on the treated pasture land.”

Medical researchers have also noticed that human health suffers when trace minerals are deficient or missing from our diets. The National Institute of Health has researched deep sea water and discovered some fascinating health benefits. Their tests have shown that deep sea water can be used to:

Here at Redmond Minerals, we are proud of our goal to nourish the world from the ground up with our thoroughly tested and expansive mineral profile of 60+ minerals. For over 50 years, our minerals have supported healthy farming operations by improving plant and animal health, increasing production, and reducing mineral program costs. Give Redmond Minerals a call today at

to try our products; you and your animals will love it!