What is Bentonite Clay?

Bentonite clay is harvested from ancient volcanic ash deposits that typically have landed in a marine environment. Over time, the ash weathers and ages to become bentonite clay. For thousands of years, humans have used bentonite clay to promote health internally and externally, as well as supporting healthy crops and livestock.

Just like living organisms, rocks and minerals are organized into groups based upon physical and chemical characteristics. Bentonite clay belongs to a mineral family called smectites.

The names bentonite, montmorillonite, and smectite are sometimes used interchangeably by manufacturers.

Smectite clays are made of plate-like grains with a rather large surface area. This unique physical structure gives them some incredibly useful chemical characteristics.

Smectite clays are very adsorptive. Adsorption is a solid substance’s ability to hold gas or liquid molecules as a thin film on its surface. With a large surface area and a naturally negative charge, smectite particles can gather and store a large quantity of positively charged cations.

Smectites like bentonite and montmorillonite are also very powerful absorbers. Absorption is a solid substance’s ability to completely soak up and retain gas or liquid molecules.

According to the National Institute of Health (NIH), these clays can also bind to harmful toxins more efficiently than even charcoal. By binding to both man-made and naturally occurring toxins, smectites can prevent living tissues from absorbing harmful substances.

Clay for Animal and Soil Health

Clay particles store minerals in a way that makes them biologically available to living organisms. Through adsorption and absorption, they can attract essential minerals and electronically exchange them with living tissues. They can also bind to substances that would otherwise irritate and harm these same tissues. The NIH study mentioned above has found that bentonite clay can:

The winning combination of volcanic ash deposit and marine environment created the Redmond clay and mineral deposit in central Utah. Redmond Conditioner is harvested from this incredibly unique resource, and has spent millions of years attracting over 60 trace minerals from the surrounding deposit. For over 50 years, farmers have enjoyed the many health and productivity benefits of our clay and mineral mixes. 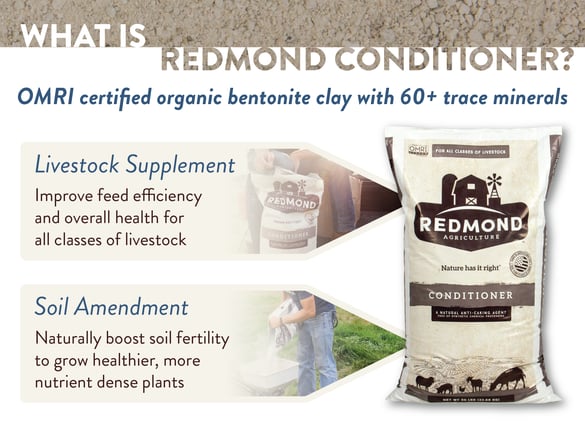 Adding Redmond Conditioner to your livestock mineral program will naturally compliment everything you are already feeding your animals. Customers are happy to tell us they have noticed “their animals just do better on Redmond:

Redmond Conditioner can also introduce a wide range of benefits for your soil and vegetation health. Click here to see soil application rates.

No matter the size of your operation, Redmond can help you improve the health and productivity of your farm. Give us a call today at